Why Yogi: The Baton or the Bait? 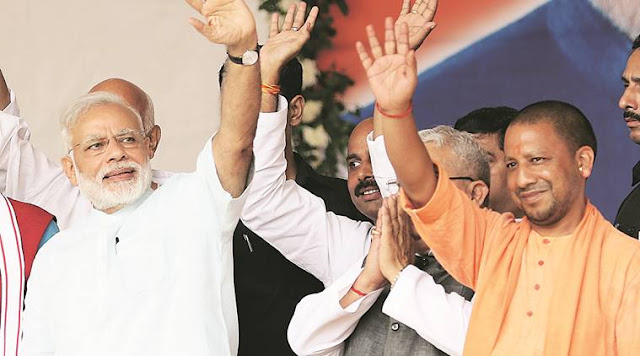 Does A very calibrated risk taker like Narendra Modi need to up the ante now, when he has swaggering majorities every where? Is he in love with risk or his optimal risk reward point is yet not arrived? Is he inebriated on his returns so far to keep leveraging his gains or his optimal point in an ever changing equilibrium is yet not there?

Well, the string theory guys will surmise that RSS forced him to do this!

With Maha-Gathbandhan a distinct realism ahead of us in 2019, the only rampart left for Modi to tear apart is the polarised Muslim vote. The Muslim Vote bank became dysfunctional in Uttar Pradesh elections 2017, for the first time perhaps in India. Do not jump to a comfort zone that the Pseudo Liberals are yet to abandon that Mr. Modi will let the Muslim Vote coalesce and coagulate even once more. Hope is the worst enemy of a bull. By putting Yogi Adityanath in the driver's seat which bull is Mr. Modi feeding with hope? The Large mass of Modi bulls or the perishing Muslim Vote Bank politics bulls-in-denial? Think peacefully, who is Modi Ji baiting?

Let the #Presstitutes the #Pseudoliberals, the #Sickulars scream Hindu Rajya and Modi knows how to en masse trap the losers and the rats.

In Yogi's Uttar Pradesh Muslims will flourish. PERIOD. Mandir-Masjid issue is a matter that is sub-judice and the courts will deal with it. With a Mahagathbandhan around the corner, Modi & Co. know well going to the hustings with a Temple in hand may not be "sufficient". Going to the hustings in 2019 with Goodness for All including Muslims will be "necessary". Goodness for all can be achieved with as well as without the Temple. Keep guessing.

Sarva Dharma Sambhaav & Vasudhaivayah Kutumbakam are the corner stones of the Hindu Way of Life and Modi is going to build his victories further on these corner stones.

Doubt, disbelief are the strongest propellants of any meme. Memetics being the study of how ideas percolate and propagate across social structures. An idea will keep propagating stronger and stronger till the time there are doubters. Why are no one able to imagine that the true agenda of Modi Ji may be to exhaust and extinguish the entire plank of Hindu vs Muslim or the Muslim Vs Hindu. If Hindus are granted their temple by the courts and Modi Ji works at including every Muslim meticulously in his Vikas - progress agenda, has he left anything for the Mahagathbandhan at all then?

Am I making a forecast or am I wishing? Is this note a foresight-ful wish or a wishful foresight? Time only can answer.

The risk has indeed multiplied manifold. Its an All In move in Hold'em Poker terms. Winner takes it all, or loses it all.

If any other colour than saffron stirs confrontational horses, law and order enforcement will be the biggest responsibility Modi & Co have undertaken in this All In Move.

From a traditional risk analytics perspective after massive victories playing all in with all your chips still on the table doesnt make sense for a rookie player too & then Modi Ji is a master of political risk taking! Does it smack of heroism, then?

But then, who has changed the course of history and destiny who hasn't had the DNA of a Hero? Choose your words carefully, then. If it is "Smacking of Heroism" or is it "the DNA of a Hero" that now comes to your mind when you imagine the picture of Modi Ji in your mind? 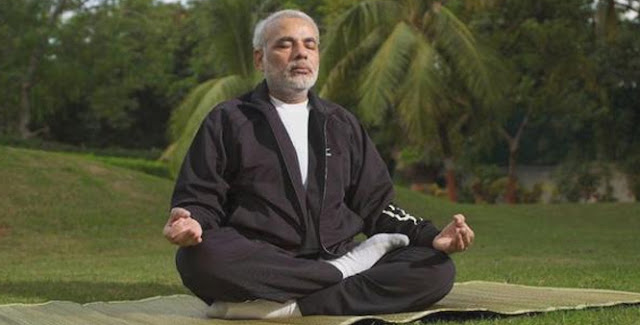 If you cant see the Hero in Modi Ji, keep pulling at the strings of your string theory or your mumma's apron.

This man is out to write history in a way that in times to come, either which ways we might refer to history of India, as India before Modi & India After Modi.

I am not competent to be either for what he has done with Yogi or to be against it. Just observing, the stakes have been pushed all in and this is here my traditional risk reward analysis mind crumbles.

I haven't been a hero, I haven't written history and I therefore will only be good at surmising at best or wondering at worst, here. Same is true of anyone else.

The next few years are a massive Point of Inflection. Velocity of time has changed several levels in the last fortnight. Yes why should you consider time only as seperatedness of only one event, that is the rising and setting of the sun. If you are willing to change the frame of your references, time is the separatedness of any event that is constantly repeating. Focus now on deciphering time in your mind as the separated-ness of each breath India is taking! Yes, you will now feel the velocity of time has shot up!

A winner all the way and a winner who has been on a historical winning streak is upping the ante and upping it like no one has ever.

Tighten your seat-belts, this jumbo Jet with 125 Crore Passengers is now at the stratosphere and the pilot and his co-pilot are used to riding space ships and not just jumbo jets.

We will either escape the atmosphere into space or collapse. Next two years could take India move through fifty years, either backwards or forwards.

But then this is what comes from the mind that is nothing but a self-organizing pattern seeking system. The mind refuses to break any moulds and keeps building more moulds.

So one leans on the heart. The heart, being the heart of a #Bhakt, one says earnestly & animatedly that India now takes the next leap ahead to achieve in the next two years what we could not in the last 50. For such change, for such velocity, incredulity, disbelief, bedazzlement are just natural.

This all in move places the Mahagathbandhan on the mat, even before it ties the endlessly complex nuptial knots! To be or not to be is going to chew the Gathbandhan, for Modi it is already a To Be. For Modi I am New India is in.